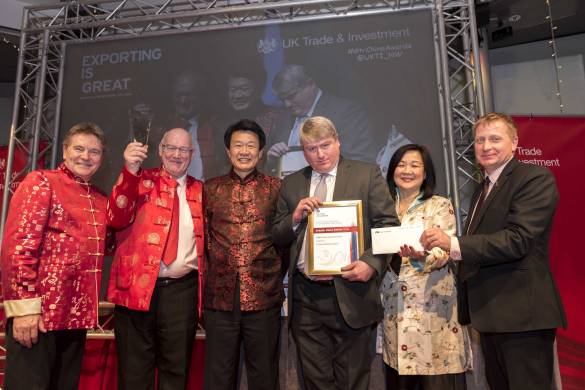 Organised by UK Trade & Investment (UKTI), the 2016 event was held at The Lowry Theatre, Salford. The award given to PTG was in recognition of the organisation’s continued successes in developing business and network links across Greater China, including bilateral trade and investment.

“We were surprised and honoured to secure the 2016 Business Award,” comments PTG’s Chief Executive Officer, Dr Tony Bannan, “particularly as we previously won the award in 2014. This further recognition by UKTI of our achievements is clear proof of our ongoing drive to build solid business relationships with organisations that could benefit from our ultra-precise rotor milling and grinding technologies.

“The judges’ recognition is all the more significant as we are founder members of the Manchester-China Forum – a body that is passionate about strengthening ties between China and the city region.”

Precision Technologies Group has been developing strong business connections with China and Taiwan since the 1980s. The business established a Chinese office in 2007 and has enjoyed increased sales into China year-on-year. In 2010 PTG was acquired by Chinese industrial corporation, Chongqing Machinery & Electric Co. Ltd. (CQME), which has made significant investment in the Rochdale business since acquisition. Typically, 98% of PTG’s products are exported, with 71% destined for Greater China.

Winners of a 2015 Queen’s Award for Enterprise

Only last year, Holroyd Precision received a 2015 Queen’s Award for Enterprise – the UK’s highest accolade for business success – having achieved year-on-year growth in exports. The Queen’s Award was given in recognition of the company’s successes in developing new markets globally, creating new machine tool technologies with particular focus on those markets, and for Holroyd’s considerable successes in exporting its highly specialised grinding and milling machines to organisations around the world.