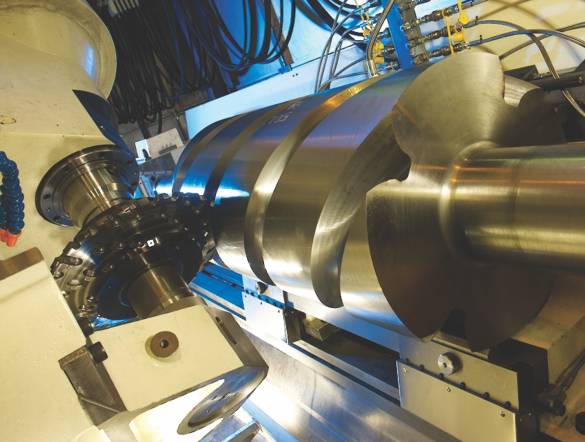 The big news coming out of Holroyd Precision of Milnrow, Lancashire, concerns the manufacture of the biggest CNC helical profile milling system ever made, at a cost of £2.5 million, on behalf of a major Chinese compressor manufacturer.

The machine is to be used for the roughing and finishing of outsize screw compressor rotors for use in the gas processing industry. But it’s the sheer scale of the project that’s so remarkable. Weighing in at a whopping eight tonnes plus, the stainless steel rotors need a special machine tool capable of handling diameters of up to 850 mm with a length of up to 4.5m. In fact, the project posed a number of major challenges which Holroyd tackled with the incorporation of some extremely innovative features.

A DECISION BASED ON PRECISION

Holroyd’s record of success in winning challenging contracts of this nature can be attributed largely to its unrivalled global reputation for identifying ingenious solutions to engineering problems and this proved no exception.

In this instance, the greatest challenge of them all involved achieving the requisite precision of movement given the enormity of the masses to be moved and the cutting forces involved requiring maximum stiffness and damping with minimum weight and friction of all axes. What’s more, to minimize the Abbe offset errors caused by the increased scale, all encoders needed to be in line with the moving axes and as close as possible to the work piece.

The large cutter loads dictated that the machine structure should be very stiff to resist the enormous reaction loads between cutter and component. The beds were constructed from cast iron, heavily ribbed internally to reinforce the structure and minimize weight, and fastened to a massive reinforced concrete foundation block.

While the Holroyd team’s technical expertise really came into its own in devising machine guide ways that provided sufficient freedom of movement without weakening the structure itself. Amidst all this technological innovation, though, a spot of good old-fashioned elbow grease was required to hand-scrape the plain cast iron guide way of the transverse axis to achieve total precision of movement.

As well as precision, however, Holroyd’s customer also demanded something else: flexibility. In addition to mounting 600mm diameter cutters to machine massive components, the cutter head needed to be designed in such a way to allow for the mounting of smaller cutters of only 400mm diameter, when required, to manufacture smaller components.

While, to avoid ‘wind up’ of the long rotor shaft and the component bending under its own weight, the component was gripped close to the body with its outer end supported on its bearing diameter.

A VISION OF PRECISION

Another remarkable and innovative feature built into the machine is a unique internal vision system with two cameras set up inside the machine itself connected to a ‘picture in picture’ LCD screen and joystick on the outside, allowing for close scrutiny of the machining area and individual cutter inserts. This was a necessary feature since operator access needed to be prevented during normal operation to comply with the latest machinery safety standards.

It’s fair to say that everything was taken into account to achieve the maximum possible efficiencies and economies for the customer.

For a start, the machine was built to very fine tolerances, which means it can be disassembled, transported and re-assembled without the need for extensive alignment tests.

Given the machine’s size, special emphasis was also placed upon minimizing pattern costs. For example, to avoid excessively large patterns, the eight-metre bed and other patterns were divided into a number of identical and special cores which were repeated along the length.

PUTTING THE CUSTOMER IN CONTROL

Due to the machine’s sheer scale and floor plan, two operator stations were installed with special attention given to safety aspects and, uniquely, only one hand-held control displaying live axes data to operate the machine. It was also necessary to ensure that all functions were mutually exclusive to an active operating station and the handheld control. While the wiring of the machine meant that, if the slave station computer failed, functionality would be unaffected.