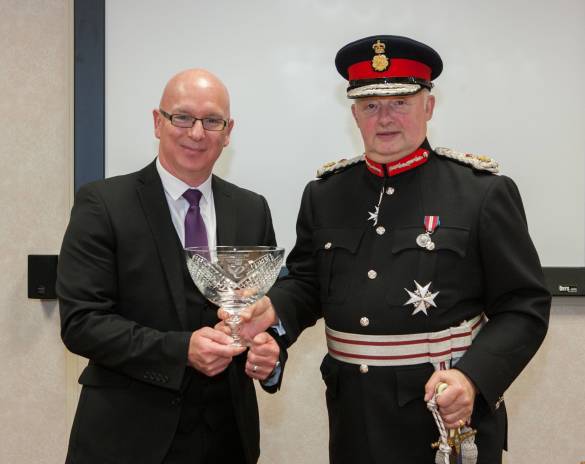 The presentation took place at Holroyd Precision’s Rochdale HQ on 29th July 2015 and was made in recognition of the company’s achievements in International Trade.

More than £7 million in export sales

Holroyd Precision has achieved year-on-year growth in exports, developing new markets globally for its highly specialised grinding and milling machines and creating new machine tool technologies with particular focus on those markets. Over the last few months alone, the organisation has secured export orders worth in excess of £7 million.

“We are extremely proud and honoured to have won what is clearly the UK’s most prestigious business award,” comments Holroyd Precision’s Chief Executive Officer, Dr Tony Bannan. “In securing the award, we were able to demonstrate significant growth in overseas trade, something that was achieved in spite of challenging global trading conditions. I would like to thank our staff here in Rochdale and our various support teams globally for the hard work and dedication that has made winning the Queen’s Award possible.”

Holroyd Precision’s Queen’s Award for Enterprise was announced along with more than 100 other winners from across the UK on 21st April 2015 – the birthday of Her Majesty The Queen.  On 14th July 2015, representatives from Holroyd Precision then attended a special reception at Buckingham Palace that was hosted by The Queen. The reception marked the 50th anniversary of the awards.

Investment in technologies, research and people

Holroyd’s recent £3 million development of the Zenith 400 helical profile grinding machine – a truly ground-breaking technology that has already resulted in orders from the USA, China and Germany – is just one example of its commitment to investment.

The company also has a long track record of investing in young people at its Rochdale HQ and for ongoing research into milling and grinding technologies at postgraduate and post-doctoral level. When developing new machine tools, such as the Zenith 400, Holroyd is also acutely aware of the importance of minimising environmental impact as much as fulfilling the needs of its customers.

Holroyd Precision Ltd has secured a number of high profile business accolades. In February 2014, the company was the proud recipient of the Greater China Business Award for the North West. Also, in the same month, one of Holroyd’s young engineers was presented with the respected AMTRI scholarship at the Manufacturing Technologies Association (MTA) awards dinner. In June 2014, the business was then identified as one of twenty up and coming medium-sized subsidiaries of foreign companies in the inaugural Sunday Times PA Consulting Inward Investment Track. Finally, in November 2014, Holroyd was named as Apprentice Employer of the Year in the prestigious Rochdale Business Awards.