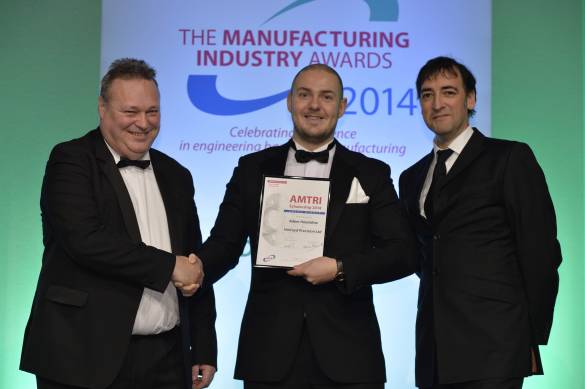 That’s because during the event, Adam, 26, was richly rewarded for his diligence and hard work to-date by the presentation of the special AMTRI Scholarship. Supported by Lloyds TSB Commercial, the scholarship will assist Adam in completing an MBA in order to pursue his goal of a management position with his Rochdale-based employer.

Two other Precision Technologies Group employees, Bradley Mooney, 27, and Jordan Beard, 25, were short-listed for the prestigious MTA Young Engineer of the Year award – further proof of the high quality of PTG’s personnel and the importance the organisation places on providing first-class staff training.

Speaking of Adam Hazeldine’s AMTRI achievement, PTG HR Director, Don Whittle, said: “Adam joined the business in 2005 as an Apprentice Machine Tool Fitter. Although he’d previously completed A levels in Business, Law and Psychology, he decided that it wasn’t the right time for university and he’d like a more craft-based career.

“With his apprenticeship complete (Some five months earlier than expected!), and having gained both an ONC and HNC in Manufacturing Engineering,” adds Don Whittle, “Adam then joined the business in a permanent role, as a Machine Tool Fitter. Driven by ambition, he also decided to take an evening course in Computer Aided Design, which was self-funded. His objective was to gain sufficient skills to be selected for a role within our Machine Design team.”

Through demonstrating a real work ethic, considerable skills on the shop floor and a genuine commitment to the business, it wasn’t long before Adam was invited to assist PTG Holroyd’s service personnel and represent the company on customer sites. Here, his ability to develop close bonds with customers and colleagues, combined with a truly proactive style, reaped real dividends. It was, therefore, decided to provide him with a six-month trial in the Design Office, with the promise that if he did well, the company would sponsor him to complete a degree in engineering. Inevitably, Adam lived up to expectation and the opportunity to study for a BEng (Hons) Mechanical Engineering degree at Manchester Metropolitan University was realised.

A valued and well-respected member of the PTG Holroyd team, Adam is now employed as a Design Engineer with the company. He offers a solid understanding of its technologies and has been heavily involved in development work surrounding the leading edge Holroyd Zenith 400 helical profile grinder. In recognition of his abilities and achievements, he has also recently been made a member of the company’s Lean Manufacturing team and an Internal Auditor. He also works as a Junior Project Engineer, involved in PTG Holroyd’s latest machine tool developments.

Going from strength to strength

“Adam has gone from strength to strength during his time with us,” adds Don Whittle.  “Indeed, it is fair to say that the more difficult or complex the task, the greater his determination to analyse and resolve it, and take on greater responsibility.”

“On behalf of everyone at Precision Technologies Group, I would like to congratulate Adam on securing the AMTRI Scholarship, one of the most significant awards in the field of manufacturing. I also pass on my sincere congratulations to Bradley and to Jordan for coming so close in the running for the MTA Young Engineer of the Year award. As an organisation, we are committed to providing the highest levels of staff training and development – an approach that the achievements of Adam, Bradley and Jordan have confirmed as being extremely worthwhile.”